The New Longest Route in the World

Flying far with Singapore Airlines will once again become a reality thanks to the technologically advanced Airbus A350-900ULR. The aircraft will be used by the airline at the end of 2018 on a nonstop route between Singapore and New York (Newark Liberty International Airport). The route is approximately 9,000nm/16,700km and flying time is approximately 19 hours. Singapore Airlines Airbus A350-900ULR runs on two Rolls-Royce Trent XWB engines, holds a lot of fuel, and is constructed of lightweight composite materials. This helps the plane fly farther than previous commercial aircraft.

This isn’t the first time the airline has offered the world’s longest nonstop scheduled flight. Singapore Airlines made history by offering the longest nonstop scheduled flight nearly two decades ago. Back in the early 2000s, the airline provided fliers with a nonstop flight on the same route between Singapore and New York. The aircraft used was another ultra-long-range Airbus jet, the four engined A340-500. It covered the distance, however, it failed to provide good fuel efficiency and in 2013 it was pulled from use by the airline. The new Airbus A350-900ULR is giving back the airline’s status as an ultra-long-range flight leader.

The A350-900ULR aircraft has a fuel burning capacity of 9,700 nautical miles, according to Airbus. This combined with a 280 ton maximum take-off weight allows the plane to stay in the air for more than 20 hours of flight time. Along with the Rolls-Royce engines, the plane also has a carbon fibre fuselage and a sleek aerodynamic design. Twenty-five percent fewer carbon emissions are given off when compared with its predecessor. Airbus reports that the design and technology create a quieter cabin plus an improved air system.

Service on the Longest Flight

When you are stuck up in the air for nearly 20 hours without a break, you’ll receive the highest levels of passenger and crew comfort. For starters, the plane is designed with window tinting sensors. These sensors change the tint in flight to go along with time zone changes. As for that improved air quality, the plane is set to get refreshed air every two minutes and that air will have a high humidity level making the onboard air less dry. 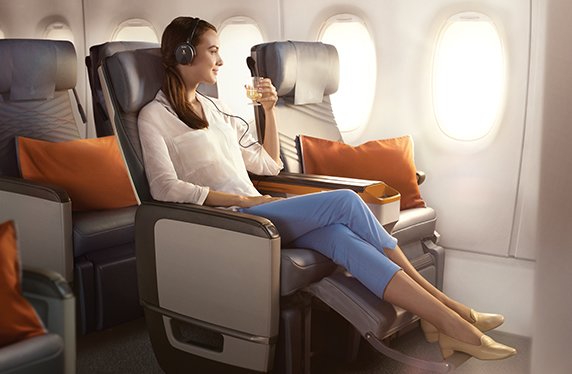 If you are ever faced with booking a long distance flight, make your comfort a priority. Start by choosing an aircraft designed to accommodate fliers' needs. The Airbus A350-900ULR aircraft scores high marks for both comfort and accommodations.